Medic and Minister: Memories of My Father 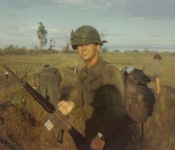 At 21 years old, my father was a newlywed with a promising future in real estate. He was settling into married life, preparing for a future filled with work, family, and good times. While the ink on his marriage license was drying, the Army was preparing another document that would change everything — a draft notice.

My father to was opposed the Vietnam War, and was enlisted as a conscientious objector. As an objector, he was given the options of going into civilian government service or going into service as a medic. He chose to go as a combat medic with the hopes of saving lives instead of taking them.

He had plenty of opportunities to save lives. On medcaps, he would go into villages and treat for illnesses like malaria, which was rampant. Often children in the villages needed care for infections due to improperly treated sores, cuts, and wounds. One boy he treated had been hit by a ricocheted bullet that tore his stomach open; and no one had treated the wound. The villagers were happy to see him come; and he was proud to help them.

My father also treated his fellow soldiers. One young soldier had been shot through the mouth, and was just fortunate enough to have his teeth apart when the bullet went through. My father told the story of stitching up this man’s face and how lucky he was. That man’s son ended up at Auburn, and I met him at a fraternity event. It was somewhat surreal.

Of course, not all injuries could be treated. My father also stood beside his sergeant, a good friend, the day he was killed. When he fell to the ground, it was my father who comforted him, and held him as he took his last breaths. My father later wrote to the man’s family, who had never been told what happened that day, or if their son was alone. He let that man’s family know that their loved one was not alone that day, and that he cared for him until the end. The mother wrote back to my father with such gratitude for the closure that he gave her. I keep a copy of her letter as a reminder of how much my father cared about comforting others.

For his own comfort during Vietnam, my father counted on letters from my mother. They were his link to home. My mother still has those letters. Some of them I have read, some too private to share, but all with a nostalgia of war, and fear, and uncertainty. It was a desperate attempt to stay grounded while surrounded by the darkness of war.

In the darkest times, he would pray and beg God to spare his life, and return him to his wife and family. Many of his prayers began with, “God, if you will just let me get back home …” And God did let him return home, but not as the same man who left.

His time in Vietnam had a profound effect on his faith. Being with men as they died sometimes made him the last person they ever talked to, the last person who touched them, the last person to comfort them. His desire to continue helping people and being there for them in their time of need led him to ministry. Business aspirations were no longer his priority.

When he returned, he ended up in youth ministry, then as an associate minister at a church of Christ in Birmingham, before entering full time ministry here in Opelika. His heart was completely into the same things that had touched it during Vietnam, reaching out to the hurting. He continued to sit beside those who were dying, comforting them in their last moments, and praying with them.

He understood better the idea of the battle for the soul, because he understood the depths of war. He knew what it was like to have an enemy who hated you because of who you were, and wished to destroy you. It made him an amazing preacher. It made him an even better father. Even though I didn’t know my father when he was in Vietnam, I saw the reflection of Vietnam in him all the days I knew him. And I knew that his time there had shaped his purpose on this earth. God refined him for his ministry during those moments in battle.

Agent Orange, a terrible chemical used during the Vietnam War, riddled my father with health problems that eventually took his life, in 2013. Since he has passed, I continue to have people tell me that they were led to Christ by my father. Maybe it was a conversation, a sermon, or simply the investment he made in their lives; but he led them to Christ, the ultimate healer. A medic in Vietnam, and a medic from the pulpit — his purpose was to save people.